As part of the Sacramento Powerhouse Science Center’s Science Communication Fellows Program, I worked with educators to develop a hands on teaching module to describe my graduate research at the University of California in Davis. I focused on the foundational subject of gene expression, sometimes called the “central dogma of biology”. In the central dogma, genes, which are functional units of DNA that encode traits, are copied into molecules of RNA. RNA is structurally similar to DNA and serves as a molecular message. The RNA is then used as instructions to construct the proteins that are responsible for recognizable traits in all organisms.

I found this hands-on activity to be effective in teaching the central dogma to students 10 and above as well as an enjoyable exercise for adults. The lesson had the dual function of explaining how genes encode traits and driving home the point that all of life is composed of the same basic building blocks, “the genetic code”.

Beads on pipe-cleaners were used to represent nucleotides (DNA building blocks) in a gene which was attached to a felt oval representing the nucleus (where the DNA is housed and copied) of a cell. I set the stage by describing a scenario in which some cells from my pet dog contaminated one of my samples of plant cells, and I needed to identify which gene belonged to the plant and which belonged to my dog, Fiona. There were two nuclei, each representing either the model plant Arabidopsis or Fiona the dog. The nuclei were fixed at one end of the table, while the “genetic code” needed to decode the gene was fixed at the other end of the table.

Students compare a “genetic message” from a plant and a dog

I then introduced a challenge: “Can you figure out: Which string of beeds represents Fiona the dog? Which string of beads represents the lab plants? The genes that make a plant a plant or a dog a dog are stored in a tiny cell compartment known as the nucleus, but the information needed to decode those genes to produce a trait (such as small or white) exists outside of the nucleus. Can you use the beads to make a copy of the message in the nucleus and then crack the genetic code to see if the message describes Fiona or the lab plants?”

There were three simple steps to unravelling the mystery. “Step 1: Pick a nucleus” (at which point I asked the students to guess if the nucleus they think represented the plant or the dog).

“Step 2: Using a pipe cleaner, make an exact copy of the beaded message” (students followed the color code on their own piece of pipe cleaner, which they got to keep as a bracelet).

“Step 3: Use the ‘genetic code’ on the other side of the table to decode the message. Each set of 3 beads represents the letter of a word used to describe the plants or the dog” (the encoded word was either ‘green’ or ‘furry’ depending on the nucleus). Conclusion: “Plants and dogs are very different, but the building blocks that make up their genes are exactly the same. Did you figure out which nucleus is which?”

Demonstrating that the central dogma and genetic code are conserved 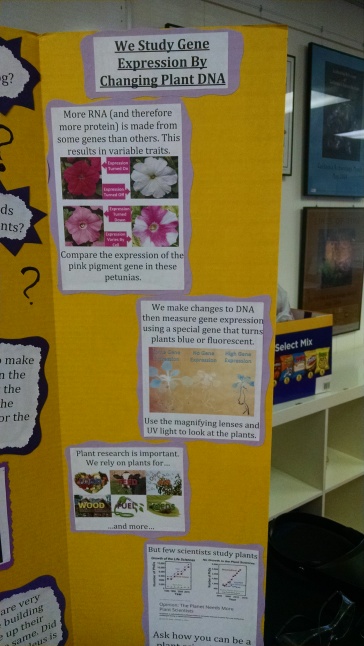 As an aside, I then went on to explain how we study gene expression in plants by making “changes to DNA then measur(ing) gene expression using a special gene that turns plants blue or fluorescent” and closed with a shameless plug for why plant science is so important and yet so under-appreciated.

I hope the reader finds this module useful for describing the central dogma in your own classroom/workshop settings.

Hands-on Activity: Central Dogma of Biology by Jenna E Gallegos is licensed under a Creative Commons Attribution-NonCommercial 4.0 International License.
Based on a work at https://escapingthebench.wordpress.com/2016/03/20/hands-on-activity-central-dogma-of-biology/.